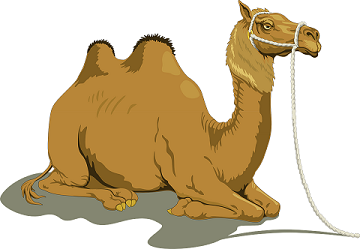 Laila’s vision was a blur for the first few moments, allowing her eyes to get adjusted to the blinding light of the sun. She flinched as a loud voice filled the air, followed by a softer, clearer tone. Cautiously getting to her feet, she looked around. Where was she now? Ringed around her was a crowd of people who kept demanding a miracle from another man who stood separately in the front.

So this is the man with the soft voice.

Then, the man raised his hands to the sky and prayed to Allah.

The last two men she had encountered had been prophets so she anticipated meeting another Messenger of Allah, though she wondered who it was. The Prophet turned to face the crowd and explained that ‘it’ would come. The people beside Laila just laughed mockingly. They clearly didn’t believe him.

The Prophet lifted a finger toward a mountain and an astounding thing took place. The mountain cracked open, and a camel walked out of it! A little baby camel walked beside its mother and Laila finally realized who the Prophet was. It was Prophet Saleh’s story!

There was a powerful silence, as people trembled with fright and excitement. The she-camel was enormous.

Prophet Saleh said: “You asked for the camel and now you got it. In exchange for this miracle, you will have to let the camel drink water from the well one day, and you the other. If you don’t obey this command, Allah’s punishment will be very painful.”

Laila thought that he was right, but all the people around Prophet Saleh began to shout and protest about the new order. She was overcome by this scene, and she had an urge to rush to Prophet Saleh’s help, but for the third time, she began to feel shaky and closed her eyes, going into a deep darkness…

Laila was awoken by someone jerking her, and she woke up with a start by her teacher who was looking cross and pointing to her Exam paper which lay on her desk. She realized the students around her were staring at her. But you know what? She didn’t blush or look awkward. She grabbed her exam paper and started writing answers, not paying any attention to the people around her.

As Laila walked inside the classroom the next week, she saw her teacher walking straight towards her with an excited smile. “Laila!” she cried. “You got a hundred percent on your exam, which is the highest grade in the whole class! Congratulations!” Laila stood there speechless with delight and then smiled to herself. Only she would ever know her secret.