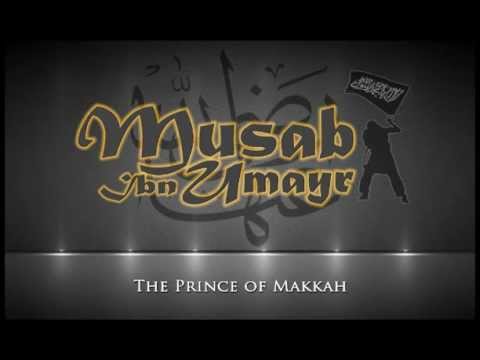 “Such a rich, handsome young man!” People would say admiringly.

Born to wealthy parents in Makkah, Mus’ab bin Umair was a teenager who, because of his high status in society, was allowed to attend even the meetings of the elders of Quraysh. His mother was very proud of him and took great pleasure in telling people about his achievements.

Mus’ab would wear fancy clothes and fine shoes while going out and was much loved and respected by people. Even the scent of perfume was so distinctive that people could immediately tell that Mus’ab was passing nearby. However, his wealth was not his only virtue; quite the contrary. Mus’ab was known to be extremely intelligent and eloquent and often amazed people by his brilliance with words.

A surprising bit of news began to spread around the city. Muhammad is claiming something astonishing. He is calling people to believe that there is only One God, and all our idols are useless.

Mus’ab, being a sensible young man, decided to look into these rumors. Not only was he curious about the message being spread, he was also alarmed and grieved by the violent reactions of the Makkans. He witnessed Bilal, the slave, getting tortured and beaten up and other Muslims being severely harassed.

Everyone knew that the headquarters of Islam was at Dar al Arqam, so he decided to pay a visit in the middle of the night. This was the place where the Prophet (S.A.W) taught his companions the Qur’an. When Mus’ab met the Prophet and listened to the Qur’an, a strange feeling of serenity and contentment filled him. He experienced something that none of his comforts or luxuries had allowed him to experience, something money couldn’t buy him. Raising his voice, he then proceeded to say: ‘Ashhadu Ana la Ilaha Ila Allah, wa ashhadu ana Muhammadan abduhu wa rasuluh.’ Having said this, he had declared himself to be a Muslim. He was fully aware of the dangers of this declaration.

Mus’ab (R.A) loved his mother but knew that she was a strong-willed woman, and therefore he kept his newfound faith a secret. Of course, it wasn’t long before the secret was out because of a man named Uthmaan, who saw him pray the way the Prophet (S.A.W) prayed. ‘Uthmaan went to Mus’ab’s mother and broke the news that Musab (R.A) had converted to Islam.

When his mother heard she was beside herself with anger. “How dare you insult us and our gods?” She screamed at him. “How dare you disrespect your family name by listening to this man?”

In response, he very lovingly acknowledged his faith and invited her to it as well. But his mother would not be moved from her opinion, and she imprisoned him in a room, making sure he could not escape.

And so it happened, that Musab (R.A) sacrificed all his luxuries and money, as well as his reputation in Quraysh for the sake of Islam. He suffered greatly being imprisoned by his own mother in the room, yet he held on to his faith. When the time came for the Muslims to travel to Abyssinia, he finally escaped and migrated as well. That did not last long and he had to eventually return to Makkah because he missed the Prophet (S.A.W) very much. When he came back, the Prophet’s companions started crying upon seeing him. Whereas before his clothes used to drag gracefully on the ground, he now barely had enough cloth to cover his body, and where before his skin was soft as silk, it was now rough. But Mus’ab (R.A) knew in his soul that the wealth and comfort of this life was nothing. It would soon pass, and what was really important was the Hereafter.

When the first group of people came from Madinah to promise the Prophet (S.A.W) that they would stay loyal to him, they requested that a man be sent to them who would teach the others about Islam. Upon receiving this request, who else would the Prophet (S.A.W) choose but someone with great knowledge and faith, someone who went by the name of Mus’ab bin Umair?

It is truly amazing how Musab bin Umair successfully called the people of Madinah to Islam and helped the entire nation to follow the right path. He taught them verses from the Quran, told them about the prophet in Makkah, and with great eloquence, invited them to accept Islam. An example of his amazing skills of persuasion lies in the story of his Da’wah to two important leaders of Madinah.

Usayd Bin Hudhair, one of the leaders of Madinah, heard that a man had come to preach Islam, a religion that went against his idols and beliefs. Upon hearing this became very angry. He went to where Mus’ab (R.A) was staying, intending to beat him up. When he reached there, he started swearing and screaming at him. Mus’ab (R.A), however, had been warned by a friend of this man’s fierce temper. He remained

calm and said, “Why don’t you sit down and listen to what I have to say? Then you can tell me whether it is right or wrong.”

When Usayd sat down and listened to him, he was immediately convinced and accepted Islam. Walking out, Saad Bin Muadh (R.A), who was not yet Muslim, asked him, “What happened? You went with the intention of beating him but did not do so.”

When Saad heard what happened, he went off to the house of Mus’ab (R.A) and decided to beat him up himself. But exactly the same thing took place, and Saad (R.A) accepted Islam at the hands of Musab Bin Umair (RA), who was but a young man. Because of Saad (RA)’s acceptance, his entire tribe followed suit.

This task of bringing so many people to accept the message of Allah was not an easy one even for a great and experienced man. Musab (R.A) was only a young man at the time, who did something most people would not have been able to achieve.

Soon after the Hijrah with all the Muslims were settled in Madinah, the Battle of Badr took place. The pagans of Makkah attacked and robbed the Muslim’s houses, so when Muhammad (S.A.W) heard about their trade caravan coming from Syria, he ordered the Muslims to get ready to attack the caravan.

The two armies met near the Badr wells. The battle took place, with the Muslims fighting bravely, and so Allah (S.W.t) granted them victory. The Muslims killed many of the disbelievers and captured many Makkans, such as al-Nadhar bin al-Harith, who was sentenced by the Prophet (S.A.W) to be executed for his crimes.

Al-Nadhar bin al-Harith said to Mus’ab bin Umair, “Tell your friend (Prophet Muhammad) to regard me as a prisoner of war!”

Mus’ab (R.A) reminded him, “You tortured his companions.”

Al-Nadhar bin al-Harith tried to remind him of the pre-Islamic prejudices, saying, “If the Quraysh had captured you, I would prevent them from killing you.”

Mus’ab (R.A) replied, “I do not share your opinion. Islam is against favoring people unfairly.”

He thought of nothing but Islam and obeyed none but Allah and His Messenger (S.A.W)’s command. In the Battle of Uhud, which took place nearly a year after the first battle, the Quraysh were getting ready to take revenge on Muslims and formed a big army of three thousand people. Abu Sufyan lead it as it advanced towards Madinah.

The Prophet (S.A.W) gave the banner of the army to his brave companion Mus’ab bin Umair. In the beginning, it seemed as if they were winning, but because of a sudden surprise attack, all the Muslims scattered in confusion.

Only a few people, like Abu Bakr Al Siddiq, Umar Bin al Khattab, and Musab Bin Umair, remained by Muhammad (S.A.W)’s side, fighting alongside him. As Mus’ab (R.A) was carrying the Muslims’ banner, the pagans attacked him so that he would drop the banner he held, since the falling of that banner meant the defeat of the Muslims.

But as you might have predicted, the young companion of Muhammed (S.A.W) was not easily overwhelmed. Fighting valiantly till the very last moment, he managed to hold the banner even as both his arms were sliced, hugging it to his chest until he was finally martyred.

Musab (R.A) did not leave anything behind except the sheet in which he was shrouded. Even the sheet was so ill-fitting that if they covered his head with it, his feet became bare, and if they covered his feet with it, his head became bare. Upon seeing the sight of this man whose perfume could once be smelled from a street away, lying there in such a condition, the Prophet (S.A.W)’s eyes filled with tears and he said to them, “Cover his head with it and put some Idhkhir (i.e. a kind of grass) over his head or throw Idhkhir over his feet.” (1)

It is only by the grace of Allah that a man with so much wealth, power and money would leave it all behind simply for the sake of the truth and a man who claimed to be a Prophet of Allah. Mus’ab bin Umair found something in Islam that was more precious than any treasure he may have owned before. He found pleasure and content in the presence of the Prophet (S.A.W) and the remembrance of his Lord.

May Allah have Mercy upon his soul.

One thought on “Companions of the Prophet – Mus’ab Bin Umair (R.A)”