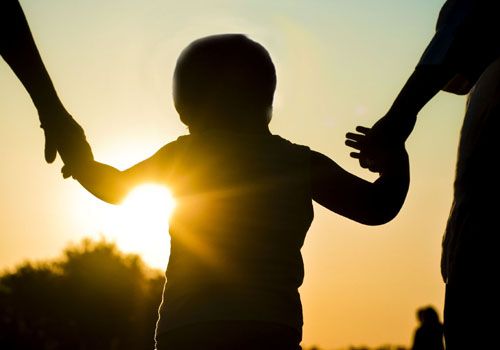 Two tears dropped onto the pavement, where a little boy was sitting. His gaze blurred and wandered as he looked up to see a group of kids playing a game that would have seemed exciting to him. But he felt so broken-hearted that he could only stare at them. The Adhan sounded in the distance, and he wished with all his heart he could go and join the rest in the prayers. He looked bleakly at the group of kids, each holding their parents’ hand and walking toward the Masjid.

He sat there, miserable and frightened until the Salah finished and people streamed out from various places, all of them happy and excited, chattering nineteen to a dozen with each other, planning all sorts of things for the day. He wished he could do the same, but he had no one.

Suddenly, a hand touched his shoulder, and he started.

“What? Who is it?” he asked, without looking up.

“My dear son, what are doing on the pavement? Why are you not with the other children, playing?” asked a warm, clear voice. Hearing it made tears come into the boy’s eyes.

“Are you sure, son? You can always tell me if you need help, and I’ll see if I can do anything.” The man said gently.

At that point, the boy could not resist the kindness, and tears came to his eyes. “Well, actually, I’m not alright. My parents passed away a few days ago, and I don’t have anywhere to go. This is my first Eid without them, and I cannot do the things that other children are doing, because I don’t have a house or money.”

“I see,” said the quiet voice, “and how would you like it if Ayesha was to be your mother, Hassan and Hussain your brothers, and Muhammad your father?”

The boy could hardly believe his ears. He looked up for the first time, and when he saw who it was, his face lit up with joy.

“Really? What more could I want then to have Muhammad (S.A.W) as my father?”

The Prophet (S.A.W) smiled at the little boy, and took him back to his house. He asked his wife, Ayesha (RA) to give the boy new and clean clothes, and a warm bath.

After this was done, the boy went out of the house, his face glowing, and as the other children crowded around him, he said, “If you were me you would also have Muhammad (SAW) for your father.”

It was the best Eid the boy had ever had.

Sahl ibn Sa’d reported: The Prophet, peace and blessings be upon him, said, “The one who cares for an orphan and myself will be together in Paradise like this,” and he held his two fingers together to illustrate.