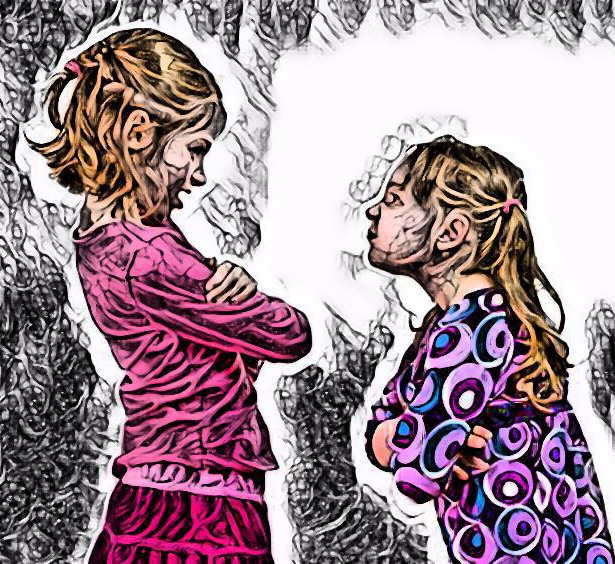 “Hurry up and get in, Humaira. You really are a slow coach!” said Amina as she impatiently waited for Humaira to get in.

“Why are you always in such a hurry, Amina? If you were in such a rush, why didn’t you get in first?” Said Humaira angrily.

How could I have sat before you, when I know that you would have made a fuss about choosing your spot first? You would have yelled and made me change my spot anyway!” said Amina, rolling up her eyes.

“As if you never yell!” Said Humaira.

“Oh dear! We haven’t even left the house yet and both of you have already started quarreling! I am sure in your squabbling you didn’t remember to recite the prayer of travel. Come on, let’s say it together,” Said Mother.

“Look mom! Humaira is taking up so much space that I hardly have any room to sit.” Amina began pushing Humaira with her elbow, to make room for herself.

“Oof! It was better that I sat in front, with mom. I am nearly old enough anyway. Can I sit in front, mom?”

“This is really too bad! Wherever you two are, you are always fighting or arguing. Just sit quietly and no, Humaira, I am not stopping just so that you can get in the front.” said mother.

For a little while, both girls sat quietly. But then Humaira found a way to annoy Amina.

“Look what Humaira is doing, mom! She’s making faces at me in the rearview mirror,” exclaimed Amina.

“Humaira and Amina, if you are not going to behave, I am just going to turn around and head straight home without going to the mall. So if I hear another sound out of either of you that is exactly what I am going to do,” Scolded their mother, firmly.

Realizing that their mother meant it, both Amina and Humaira remained silent all the way to the mall. As they got off, their mother reminded them to say the prayer before entering a marketplace.

“Oh, I don’t think I remember it, can you please say it out loud, mom?” requested Amina.

“You always seem to forget it,” said Humaira, shaking her head.

“Doesn’t matter, Humaira. If Amina says it a few times, she’ll know it soon enough, just like I repeated it with you last year and now you know it.”

“Why should we say a prayer when we go shopping, mom?” asked Amina.

“Our Prophet (SAW) taught us a prayer for every occasion so that we remember Allah at all times. Especially in the market place when there are so many things to attract our attention that we get lost in them. We must remember to say the prayer so that Allah (SWT) can protect us from spending too much or from buying what we don’t need. Come on now, let’s go and get what we came for.” Their mother explained.

Amina and Humaira entered a shop with their mother. As their mother looked through some clothes on the rack, Amina suddenly screamed.

Their mother turned around, startled, “What happened Amina?”

“Mom, Humaira stepped so hard on my foot, it hurts!” said Amina loudly.

“Mom, I did not do it on purpose. It happened by mistake. And anyway it wasn’t so bad that Amina should scream so loudly!” said Humaira.

“That’s not true! It really does hurt! Look how red it is!” Amina began to cry.

Their mother left what she was looking at and began to massage Amina’s foot, trying to make her feel better.

After a while, Amina, Humaira and their mother entered another shop. Many clothes looked interesting.

Suddenly Humaira’s eye fell on something she liked. “I really like this yellow outfit,” she said happily, as she pulled it out for her mother to see.

“Oh, Humaira, can you please choose something that is not yellow for a change?” said Amina. “Soon people will start calling you a yellow taxi, or maybe the yolk of an egg.”

“Look, mom! Amina is making fun of me!” complained Humaira.

“You are always doing it to me, so now if I bug you, what is the problem?” replied Amena.

“You really don’t care about the feelings of your older sister, do you?” said Humaira.

“Well you don’t really care about the feelings of your younger sister, do you?” replied Amina in the same tone.

“Are you two going to stop this or are you going to go on fighting?” said mother exasperated with her two daughters.

As their mother looked through the clothes, she found something that both Amina and Humaira immediately thought was beautiful. It was a red dress and had sparkles in the front. And the material was soft and silky. It was a size that could have fit either one of the girls since they were only a year apart. Mother looked to see if she could find another one in the same size, but unfortunately, there was only one.

“I want to wear this for Eid,” said Amina.

“No, I am going to get it. Anyway I am older so I should get the first choice,” said Humaira.

“What difference does it make if you are older or younger? I like the same thing that you like.” Their mother did not know what to do. She looked upset but did not say anything. Amina saw that her mother was looking sad. She shook her head and looked at Humaira.

“You know what, Humaira, let’s not fight. If you like the dress so much, you can have it. I’ll just look for something else.”

Mother paid for the dress for Humaira and the three of them left the shop.

“Good girl, Amina! I am so proud of you. You did a good thing to let go of what you really wanted. Rasul Allah (SAW) has said that the one who ends a fight or an argument even though he is right, will be given a house in paradise.

“Yes, really. Rasul Allah (SAW) also said that the devil comes near those Muslims who fight and are angry with one another. If one of them keeps quiet and is patient then an angel replies for him.

As their mother was telling them, they came to a shop, and there, right in the window was the same dress that mother had just bought for Humaira but in a pretty pink with silver trim. It had the same sparkles all over the front. They entered the store and sure enough, there was one in Amina’s size. Amina was delighted.

“See! Allah has helped you get something just as beautiful as Humaira’s dress, and the house in paradise is InshaAllah yours as a reward.” said mother.

“It would have been a good thing had I let Amina have the one I bought.” said Humaira, sadly.

“Dear, you really need to be brave to give what you love to others. Also, instead of fighting with each other about little things, you should just forgive one another.”

“Mom, why are you only telling me? Amina should also learn to do the same,”  said Humaira.

“Come on now! Stop thinking of what the other is doing. Think about what you yourself are doing. Tell me. Do you want a beautiful house in Jannah or not?” asked mother.

“Yes, mom! I want a palace like the one I was reading about in a story the other day,” said Humaira, excitedly.

“Why not! InshaAllah, Allah will give you an even more beautiful palace than that. But for that……

“WE WILL HAVE TO STOP FIGHTING,” said Amina and Humaira together. The three of them chuckled as they made their way towards the shoe shop.