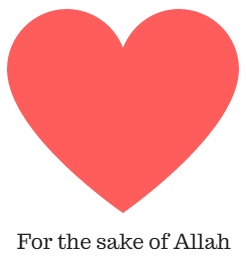 The next morning Khalid woke up to voices in his room. No, not voices, they were whispers. He cracked his eyes open and saw three figures crouched beside his bed. At once, his heart rate sped up, who were these people? He almost let out a sigh of relief as he recognized the voices when his mind cleared a bit.

“Where should we hide this one?” Sa’ad asked the other two.

“Shhh, not so loud! You’ll wake him up!” Maria whispered.

Khalid tried to make his breath as steady as possible. After all, he didn’t want to be caught.

“How about the windowsill? He’s bound to open it some time, right?” their father suggested.

Maria let out a little giggle. “Abu, Khalid never opens his window. He hates the cold.”

From beneath his half-closed lids, Khalid spied Sa’ad making his way across the room. He stopped in front of the dressing table, and opened a drawer, pulling out a hairbrush. “How about here? He must brush his hair sometime, right?” he joked.

Khalid heard the scuffle of paper, the cutting of tape, and the closing of a drawer. Within a minute, they had left the room, quietly shutting the door behind them.

The moment they left, Khalid leaped out of bed, and took his brush and removed the paper taped to it.

I am always two-tired, but I am never too tired. What am I?

“Oh, great, another clue” Khalid mumbled to himself.

Two-tired? What did that mean? “Two-tired, two-tired…..” Nothing came to mind. What about ‘never too tired’? The only things that never got tired were inanimate; machines. Maybe the object was a machine! What machine, though…? The only machines he could think of right away were his computer, and the TV. He still didn’t get what ‘two-tired’ meant. He turned on his computer and logged on to the Internet. He didn’t really think he would get any search results, still, he typed in ‘two-tired machines’ on the search bar. Nothing too helpful came up. On impulse, he erased machines and just searched for ‘two-tired’. Right away, images of bicycles popped up. Bicycles! That was the answer to the riddle! A bicycle has two tires, but it never gets too tired! Genius!

Khalid hurried downstairs to the garage where his bike was parked. As expected, a note had been neatly placed in the bicycle’s basket. It was longer than the first one.

The Prophet Muhammad (SAW) said: “Seven persons; Allah will shade on a Day where there is no shade but His. A just ruler, a young person who grew up in the worship of Allah, a person whose heart is attached to the mosques, two persons who love each other for the sake of Allah and meet and part on that basis…”

As Khalid finished reading the second Hadith, he knew right away which of these qualities he was most lacking and that his parents had been telling him to correct for a very long time now.

Khalid informed his mother where he was heading, and sped off on his bike towards his Auntie’s house.

Auntie Naima was his mother’s sister, and though she was perhaps the sweetest person on Earth, her sons seemed to be the very opposite. Safwan and Marwan, her twin sons, were, to say the least: rowdy. They always seemed to be fighting amongst themselves, and they annoyed Khalid to no end. As he neared their house, he thought of what he was about to do- willingly spend time with his cousins. He almost turned back, but then thought of the note in his pocket, and the words of his Prophet (SAW) written on them. He would meet Safwan and Marwan with the sole purpose of pleasing Allah, and he hoped that this act of his would be accepted. With this thought in mind, he got off his bike and rang the doorbell.

In retrospect, the visit wasn’t too bad. The twins actually managed to behave themselves for once, and they were actually sort of fun to hang out with, once Khalid made an effort to get to know them better. That is what he told his family that night as they sat down for dinner.

“I’m really proud of you, Khalid,” his father told him. “Not only did you find the clues and solve them, you were able to evaluate what problems were present in you from the Ahadith, and correct yourself too. Most people can’t do this much in a lifetime!”

“Thank you, Abu. I am not really worthy of your praise, but I’m glad you gave me this chance to help make me a better person.”

Khalil smiled fondly at his son, “Tomorrow, you will face the last test and InshaAllah I am sure you will do great on it.”

Click on the link to Read the last part: The last trial