Long ago, in a faraway jungle, there lived a beautiful lioness that only cared about fashion. She was forever going to parties and putting make-up on. Her husband, the king lion, was the one who hunted for food while the lioness stayed at home.

Months passed by, and with time, the lioness completely forgot how to hunt. One day, the lion got very sick and wasn’t abl 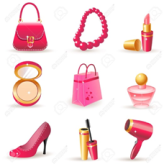 e to hunt because the Dr. Monkey had ordered him to rest. The king told his lazy wife to go and hunt since he couldn’t. The lioness had no choice but to try.

She set off into the forest. On the way, she saw a zebra and ran to catch it but, since she hadn’t practiced hunting in such a long time, missed. She sighed and thought: ‘Oh! How I wish I were at the tea party with my friends instead. Now I’m getting sweaty and hot. Dear, dear where’s my tissue? And I really must fix my lipstick!’

She tucked her hair, put some more lipstick on, and continued her hunt. However, she soon realized that it was getting impossible. She had wanted to catch a gazelle, but it ran away. So did several other animals. Tired and hungry, she came upon Mr. Rhino who lived near her house. She forgot that his children were friends of her children too, and would no doubt tell her little cubs about what she was going to do.

Mr. Rhino eyed her warily. ‘What do you want?’ He asked. He knew th

e jungle’s most fashionable and lazy lioness. The charming lioness took out her $20 voucher and handed it to him saying: ‘Here. You can have it, but only if you agree to hunt me a most delicious animal.’ The rhino, out of greed, accepted the offer and came back a few moments later with a large zebra.

The lioness went home and surprised her husband very much! He didn’t know she could hunt. ‘Are you sure you hunted this?’ He asked. ‘Of course,’ said the lioness, taking offense at once and getting on her high horse. She told her children too, and even they seemed surprised!

In the evening, they went over to their friends, the rhino’s children and found them playing with many different toys – a new doghouse, a swing and a big ball. “Wow! Where did you get these from?” The lion cubs asked enviously. Their friends told them what had happened earlier
in the day and that they got the toys from the $20 voucher their mom gave their father.

When the cubs came back home, they shared the story with their father. He, of course, was furious. He found his wife sitting in front of the mirror, admirin

g herself. He said angrily, “You should be ashamed of yourself! I know how you got Mr. Rhino to hunt for you, so you can’t deny it! I’m tired of you running off to your parties instead of doing what you should be doing! No more parties for you until you learn how to hunt properly, and that’s that!”

Although this was a tough punishment for the silly lioness she was ashamed and guilty and knew she deserved it. From that day on, she really tried hard to behave

like a proper, brave and caring lioness. This pleased her

husband and kids very much. Although she still loved her make-up, she now knew that looking beautiful was less important than being an honest and trustworthy lioness.